Back in my student days, 1984 was indeed the year in which I started being active in the voluntary and political spheres. 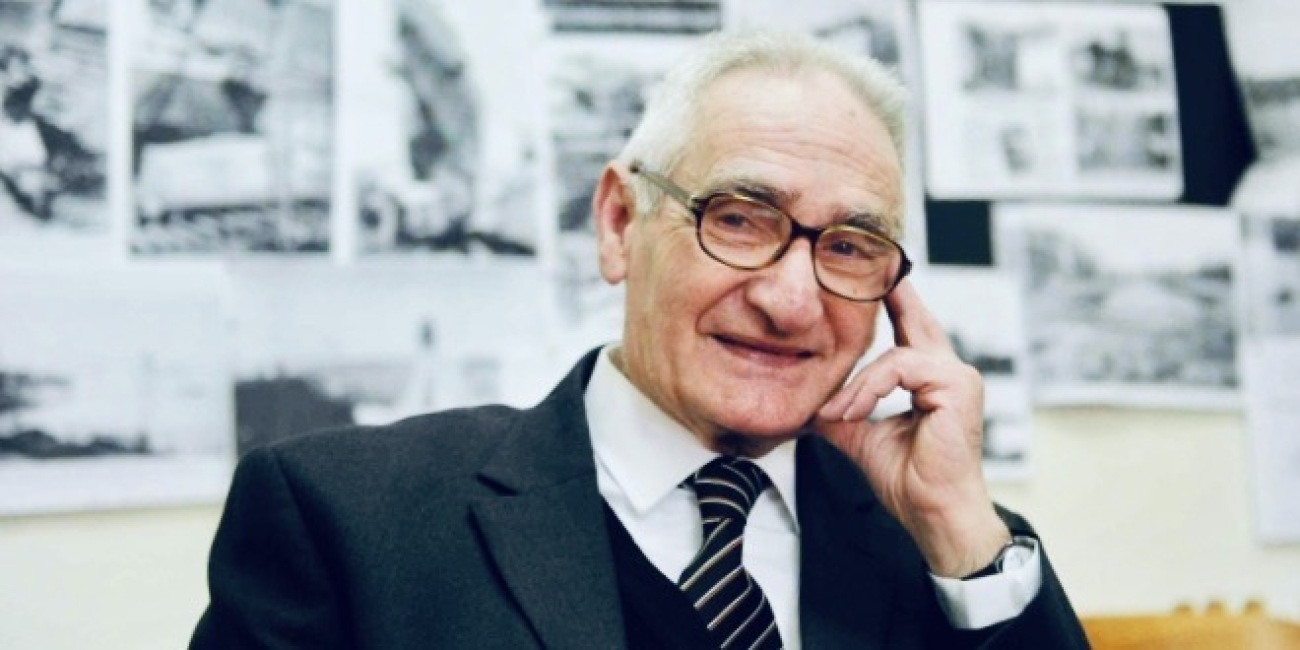 It was Prime Minister Dom Mintoff’s last year in office and I was a secondary school student at the Liceo Vassalli Junior Lyceum of Tal-Handaq. At that time, students achieving success in the eleven-plus exam went on to attend prestigious 'junior lyceums' during their secondary years, whilst those who did not attended 'area secondary schools'. This was similar to the operation of the Tripartite System in the United Kingdom following World War II.

In the course of 1984 a fierce battle erupted in Malta between the Socialist Government and the Roman Catholic Hierarchy. At stake was the control of private education, which until then had remained almost completely in the hands of Catholic Religious Orders. Emotions ran high and at some time serious civil unrest was highly probable. The events were covered by newspapers and television stations in many countries; even the European Parliament became involved. 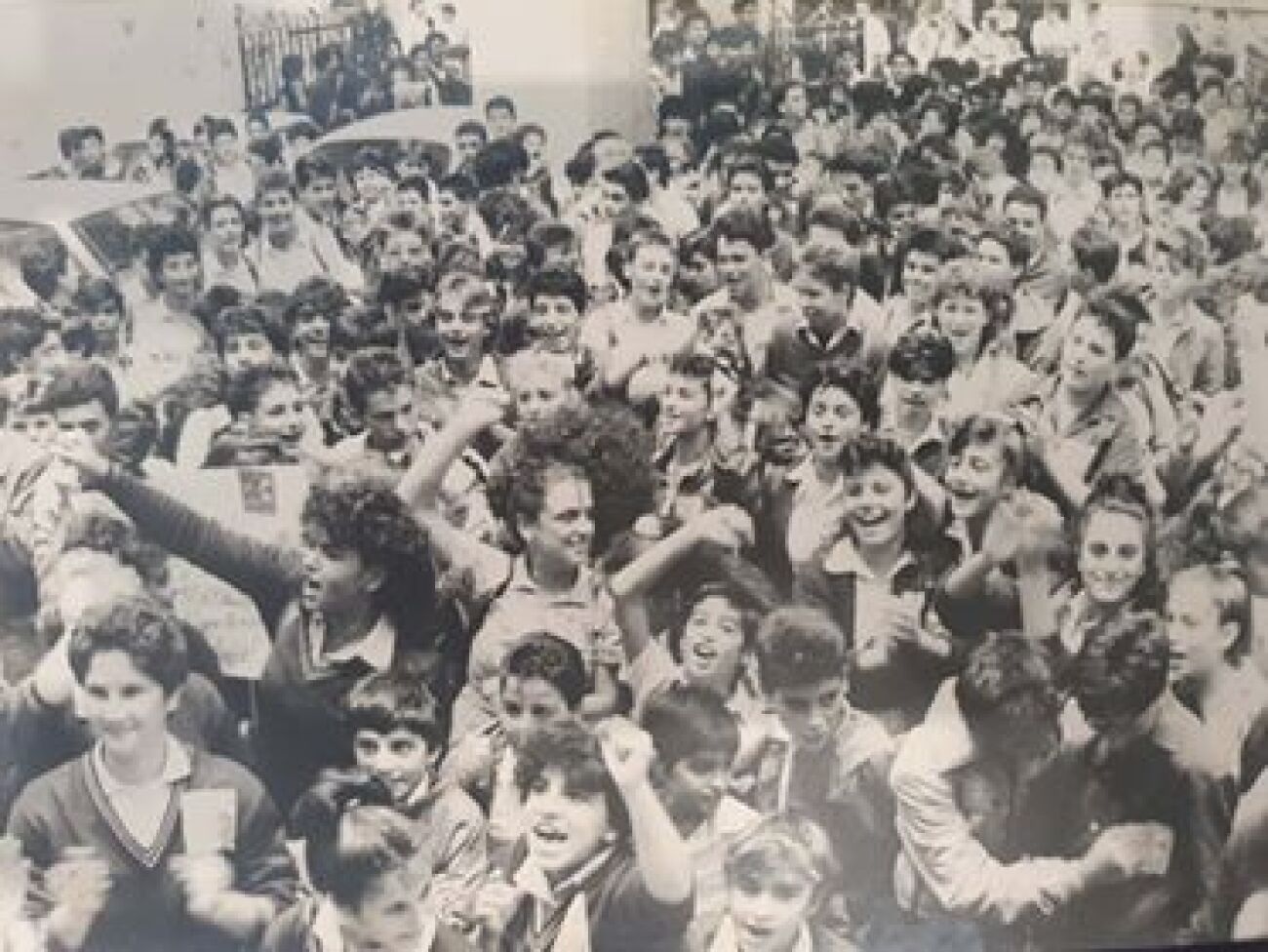 The fact that an extensive amount of teachers felt it politically expedient to abandon their students and go out on a prolonged strike also added fuel to my wish to address and assist in students’ rights. I had been elected as President of the school’s students’ representative council and, with a loyal and zealous team of fellow left-wing students hailing from different educational establishments, was also elected as the President of the national students’ union, which, at that time, was affiliated with the International Union of Students. It was a position I held up till 1990. My leadership of the movement later resulted in many a student demonstration, including a nationwide demonstration of more than eight thousand students, hence the enclosed photos. 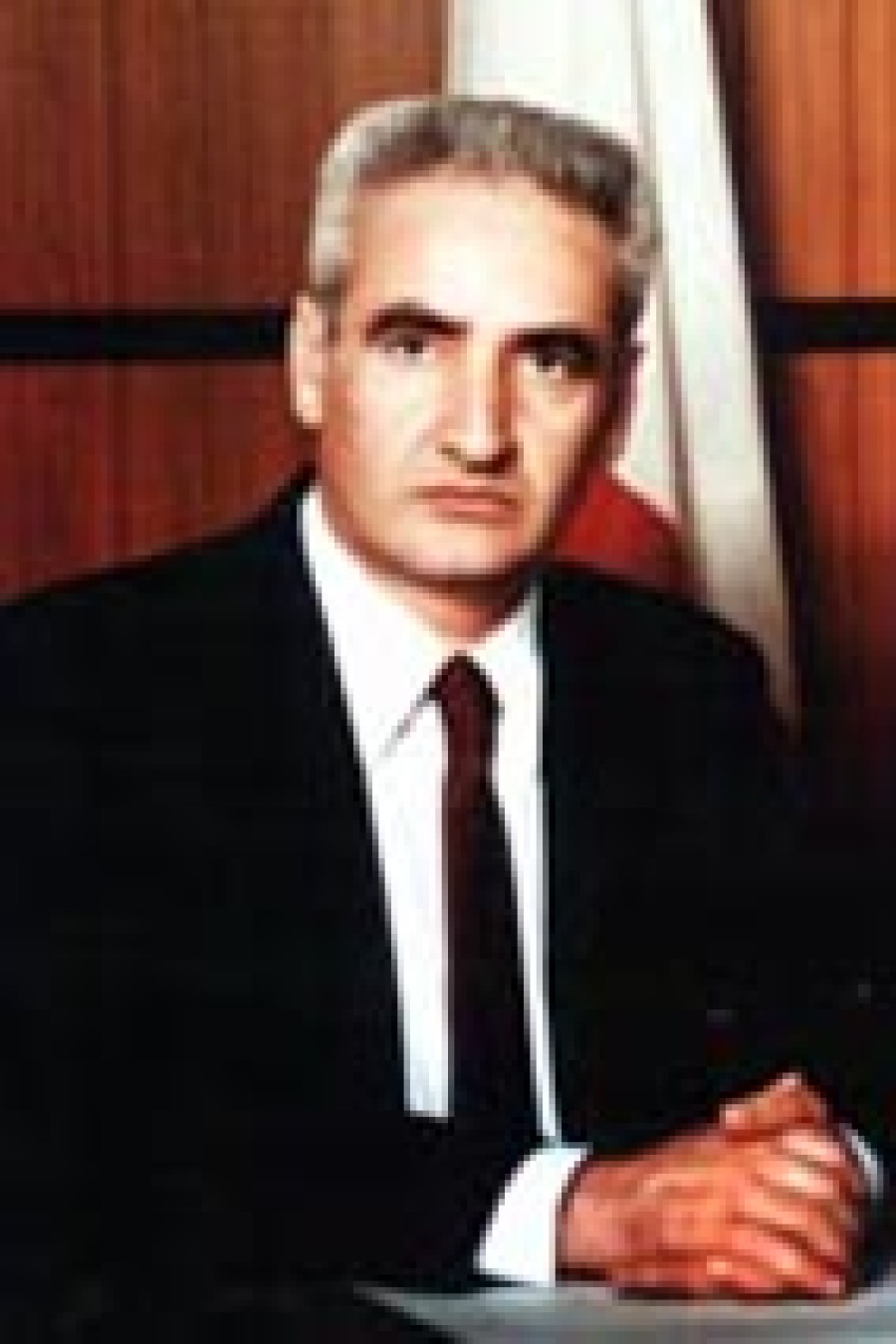 Ironically, Karmenu was born in a family strongly anchored in the conservative Nationalist Party. His brother Antoine was a Nationalist MP and Parliamentary Secretary while a cousin, Ugo Mifsud Bonnici, was a Nationalist MP, Minister and later President of Malta. Later, even Ugo’s son became a Nationalist MP and Minister. Karmenu has two sisters and three brothers, one of whom is an Archpriest. He never married. In the 1960s, at the height of the dispute between the Maltese Church and the Labour Party, Mifsud Bonnici was an official of a number of lay organisations connected to the Church, including the Catholic Social Guild and the Young Christian Workers Movement (also as editorial board member of their Il-Haddiem newspaper) and supported the ‘diocesan junta’ of Church organisations opposing Dom Mintoff and his Party. He would later claim to be ‘a Nationalist by birth, but a Labourite through free choice and conviction’.

In 1969 Karmenu Mifsud Bonnici was appointed as local consultant of Malta's General Workers' Union, playing a role in the struggle of the trade union and the Labour party against the Nationalist government-proposed Industrial Relations Bill, which foresaw sanctions up to imprisonment for workers on strike. He continued his engagement with the Labour Party throughout the 1970s. 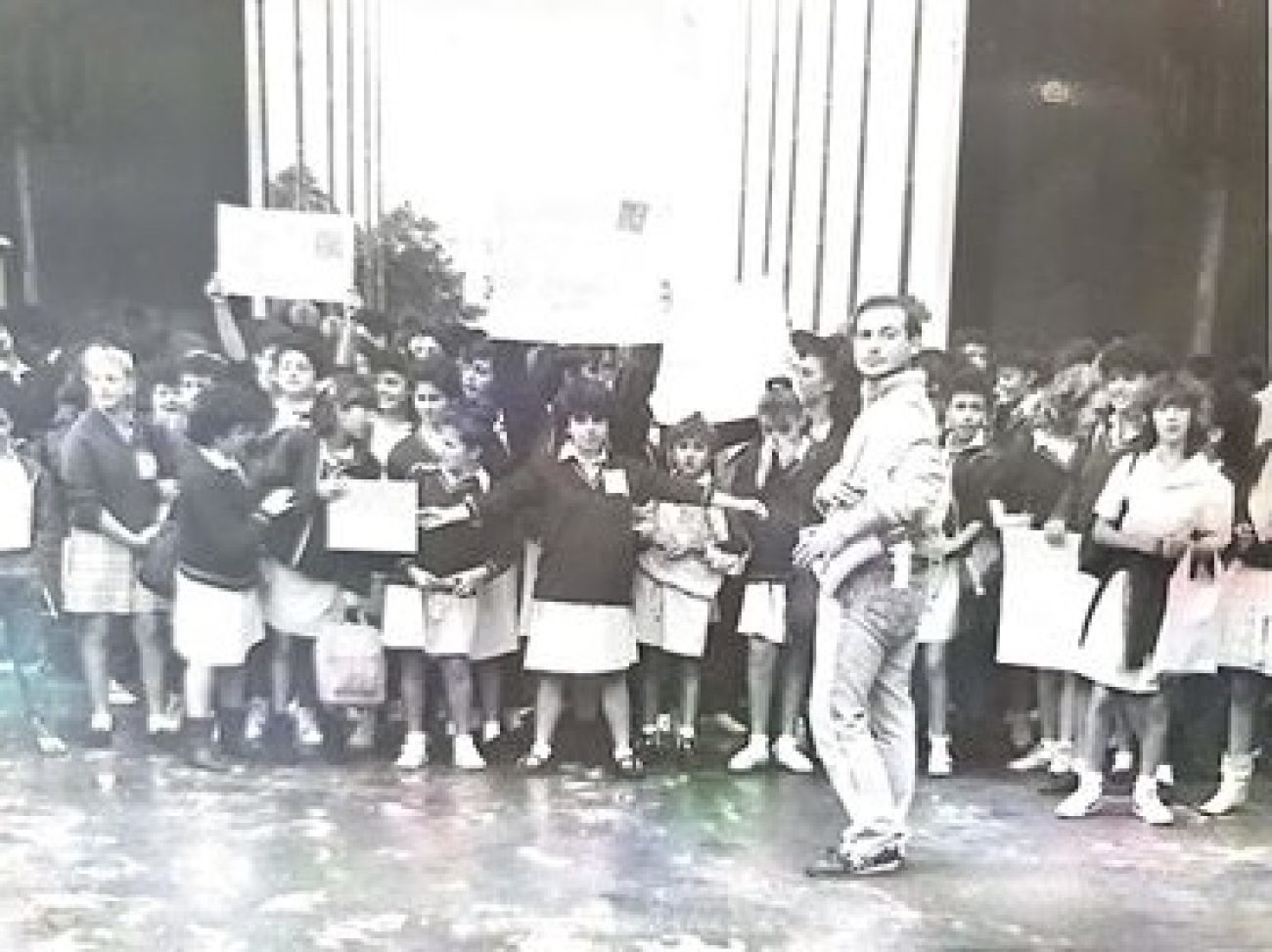 Back to the eighties. During those years, I progressed from merely being a student activist to being totally immersed in the Labour Party and its structures. I was elected an official of the Young Socialists and President of the Paola Labour Locality and an official of the fourth Party district committee. I was also appointed as Party delegate and sat on the National Executive. The Party was, at that time, quartered at the Macina, in the historical Cottonera area deep in the South. I started volunteering at the Party and, in time, was coordinator of extensive campaigns and initiatives, liaising of mass events, security during Party events and part of the first marketing team of the Party’s brand new radio station. I was also appointed as one of the three Assistant General Secretaries of the Party during this period.

It was during these years that I became very close with Karmenu, always there with him and a handpicked team of his loyal party officers and activists. He used to drive me home in his legendary, white Volkswagen Beetle many a time due to the long hours at HQ. During his stint as Prime Minister, my studying days at school as a pupil were traded for being always there for the Prime Minister.

Karmenu was indeed a humble and intellectually brilliant politician. His grasp of industrial and fiscal law and his University lecturing on these subjects made him the expert on the subjects matter. Totally unlike his predecessor’s flamboyant nature, Karmenu was as introvert as can be, although once an idea or a concept had formed in his mind, he was adamant to see it through.

There are many traits which I learned from Karmenu. A mentor he certainly was, for he was one of the most important persons to instil in me the need of a moral compass and the joy of having a social conscience uppermost in one’s agenda and day-to-day engagements. During his years as leader of the party, I constantly witnessed his giving free legal advice to all and sundry without ever accepting any form of remuneration. Hundreds of low wage families benefitted from his private actions in this sphere. His parliamentary honoraria was always distributed to a number of poor households who had extensive problems in making ends meet. He did all this out of conviction, and never made a fuss about it. He instilled in me the maxim that charity and assisting the needy is done for its sake; it is not something that one takes credit for. He also instilled in me the other important maxim that when you give from the heart, you inevitably receive back. Some would call it karma.

He was leader of the party in troubling times. Some used to describe him as the angel among demons, although that is indeed a glaringly harsh description. But it embodies his puritan streak and his aversion to corruption and shady dealings which inevitably tar any political administration. He always tried to teach me that in politics, you attack the idea and not the person and that your political antagonist could very well be your friend or your family. These were words which were totally not in synch with the polarised political scenario of that period. 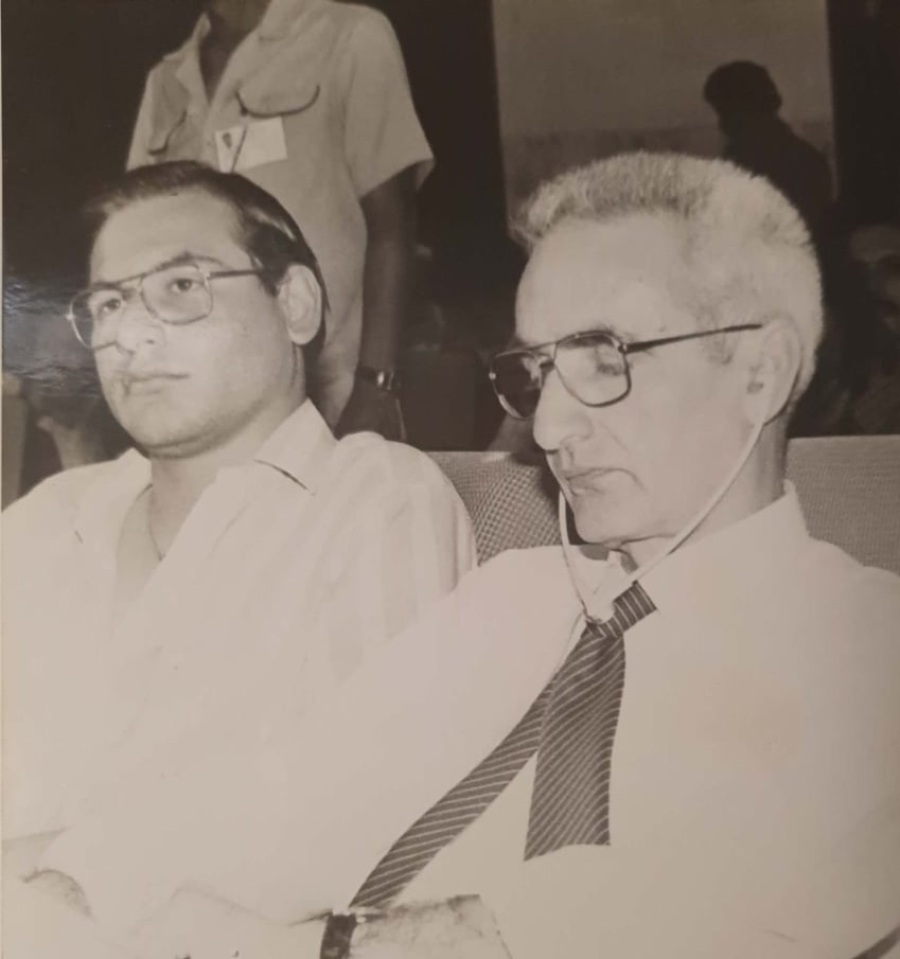 As noted already, Karmenu spent three years as Prime Minister of Malta and a further five years as leader of the opposition. Whilst Prime Minister of Malta, I accompanied him in my first official delegation abroad, to Libya. The photo reproduced here shows my erstwhile lost youth and hair. Libya was a country I had to visit on many occasions due to my being placed in the Libya desk by my party leader. Later, this immersion into diplomatic delegations abroad served me well for my entrepreneurial exploits in various countries.

They were difficult times for the Party. A number of ministers within the party were keen on taking over the party and pushing it to a more violent and aggressive path. Clans of minsters’ canvassers were doing their utmost to take over power, which would have resulted in the Party being broken into pieces and loose its unifying strength and democratic credentials. These troubles affected his heart and he had a number of episodes which badly affected his health, including a minor heart attack on a plane when I was travelling with him abroad. His perseverance and strength of character kept the party intact and, whilst still not leading the party to another electoral victory, gave his successor the natural spring-board to win the next general elections with a huge majority in 1996. 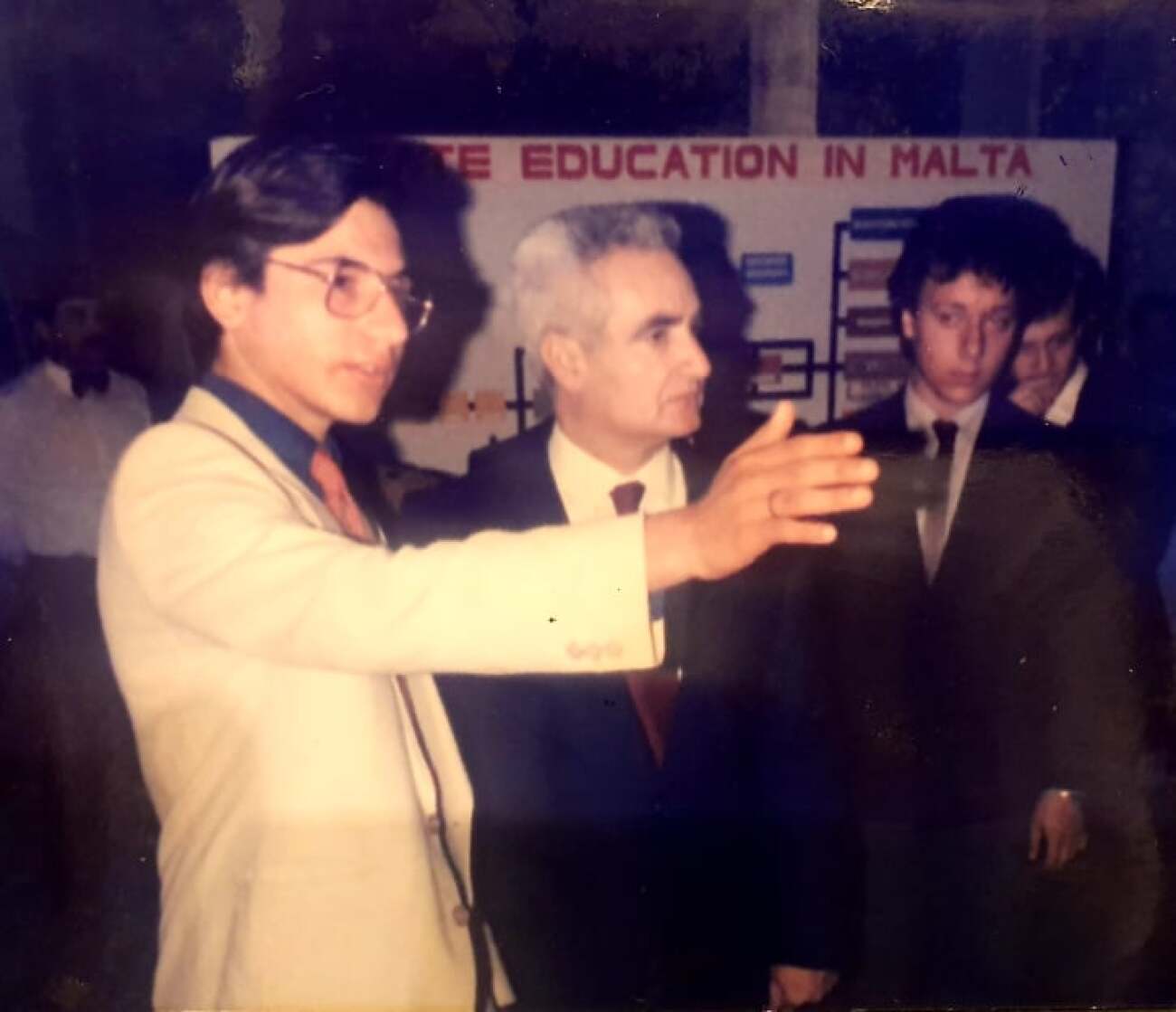 But by far the biggest lesson that I learnt from being a part of these times was that in politics, history is written and interpolated in such a manner that it becomes very difficult to find the truth in the fog and mist of historical manipulation. The eighties and the nineties are periods in our national history which have yet to be properly analysed and diligently written, with unbiased academics peeling off the marketing spiel and political bias of prevailing commentaries. I lived them and was active in this period and, if I had the time and the inclination to do so, can write volumes on this period.

Marketing was never Karmenu’s forte and, due to the lack of experts in this field around him, his true nature and his true colours were never really and properly projected. And that, my friends, was one of the major reasons why I purposely opted to specialise my studies in marketing apart from management.